At Fir Tree we are very lucky to have a number of Science Experts from STEM Net, Science Oxford and other companies who come to visit us and share their knowledge and expertise. Below is information about the experts who have visited different year groups over the course of the year:

Holly Johansen, a scientist visited Ash and Willow Class. She came to talk to us about rocks and her job because at the moment we are studying rocks for our science project. Some of the things we learnt from Holly were that crystals are a type of rock, Holly’s job helps her to make sure buildings have a secure foundation. She tests the rocks under the sea so that wind turbines can be put there. Holly’s job is a geo-thermal engineer – it sounds great fun.

During this session, Cherry and Silver Birch learnt about genetics and inheritance. As well as this, they looked at the evolutionary tree with Amy - who is a Molecular Physiologist at Oxford University. The children had the opportunity to swap different areas of the school and learn about bacteria growth - they really enjoyed the experience. Please see Silver Birch Class page for more details and photographs.

Children in Science Club (Year 3 to 6) had the opportunity to learn about the Ocean as a habitat for lots of animals and marine life. Hannah, a Senior Oceanographer at Fugro, came to share her knowledge and talk to us about how Science is used in daily life. Here are some photos from the afternoon:

To start their 'Out of this World! Space project', Year 5 were very lucky to have a visit from the Explorer Dome. After crawling into the dark dome, they were greeted by Gemma and Kevin who took them on a 'journey' to experience the solar system. While in the dome, Year 5 had the chance to learn about the constellations and some of the Ancient Greek stories about the different stars. They had such an amazing morning and learnt so many cool facts about Space, the Earth, the Sun and the planets. All of Year 5 are now very keen to learn and develop their knowledge about Space over the next term. Here are some photos:

Year 3 had the opportunity to meet Amy and develop their knowledge for their Science project 'Fighting Fit'. They spent time talking about the bones in the human body, discussed the different skeletons of animals and completed an investigation where they collected data about broken bones. If you would like to see more information about the session, please visit Ash Class page where is there a document that explains all about the visit.

Year 5 were very lucky to have a visit from France Gerard, a senior Earth Observation Scientist and STEM Net Ambassador, on Tuesday 7th February. After learning about satellites (and that there are both natural and artificial ones), we had the opportunity to interpret satellite data for ourselves using Google Earth. Both classes loved investigating different parts of the world and the changes that have happened over time – which had been captured by the satellites. One of the coolest facts we learnt was that there are over 2, 271 satellites orbiting the Earth at the present time (either orbiting in a geostationary or sun-synchronous way)!

Year 5 were very lucky to have another visit from France Gerard, a senior Earth Observation Scientist and STEM Net Ambassador, on Tuesday 28th March. We developed our knowledge of satellite data through using Google Earth - we really loved investigating different parts of the world and the changes that have happened over time. France showed us how to pin-point certain points on satellite images and use a ruler tool to measure differences.

On Monday 22nd February, Sycamore Class and Cherry Class were visited by Jamie Halls who taught us about Earth, Space and the Universe! Click here to find out more!

On Friday 11th December, Willow Class and Ash Class were lucky enough to welcome Mr Hunt, a sound expert, into our classes for the day ! Click here to read about it!

On November 27th, during their All Creatures Great And Small project, Cedar Class and Maple Class were learning about animals. They were lucky to have a visit from an animal expert called Mr Pearce. Mr Pearce was very knowledgeable about different species of worms. He explained that humans know very little about worms in the world and that they are very under-researched, especially in the UK. We have about 26 species and they do different tasks. He brought some different worms with him for Cedar and Maple to look at and identify. 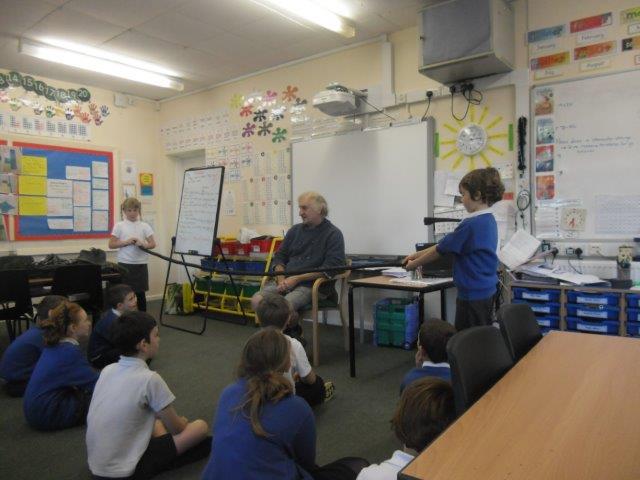 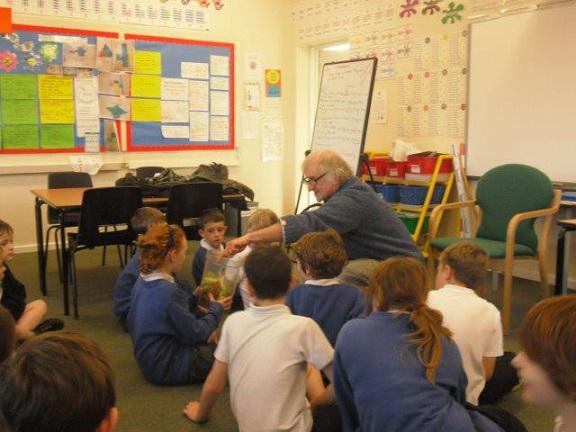 It was a great opportunity to learn from a science expert! Thank you Mr Pearce!

Upper School enjoyed 'launching' our Out of this World project with an amazing visit from the Explorer Dome! We discovered hundreds of fascinating facts including: information about the planets in our solar system; different star constellations and why we have day, night and different seasons. 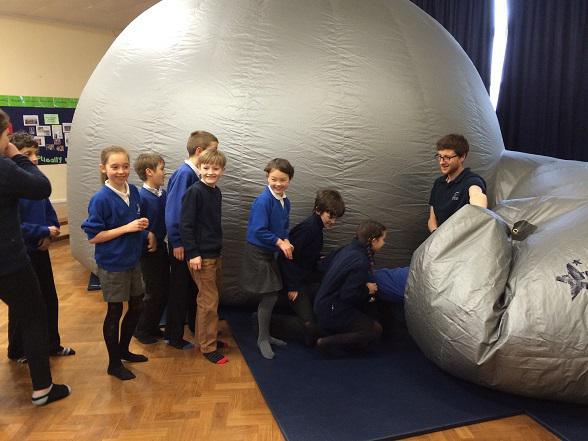 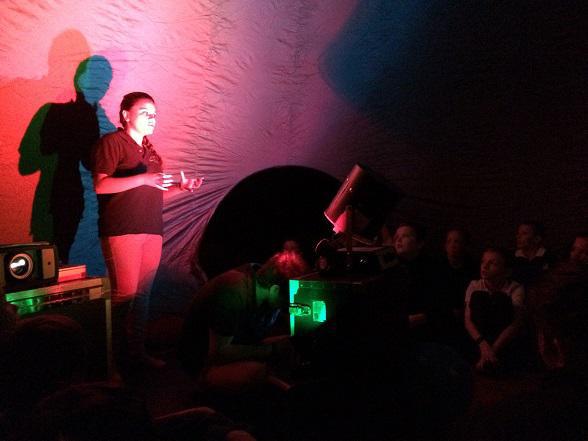 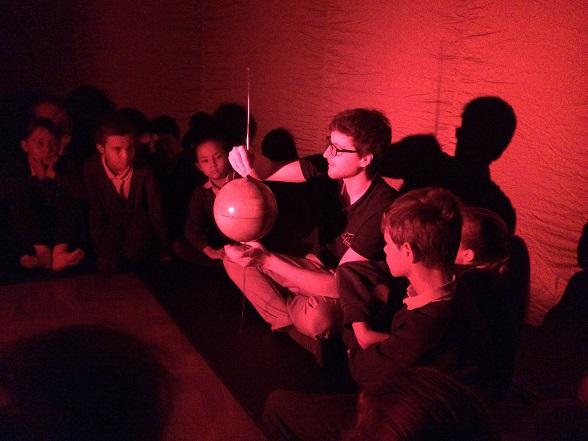 On Monday 16th March we had a visit from Mr Brunstrom who works for the European Space Agency. He came to work with children in year 5 and 6 who are currently learning about earth and space in their Out Of This World project as well as a group of year 3 and 4 scientists. 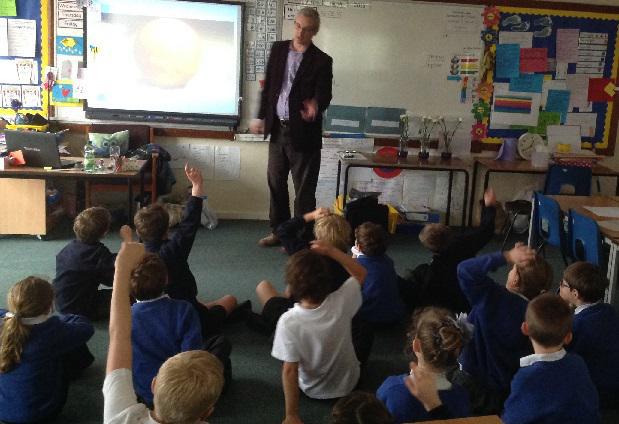 'I learnt about the European Spaceport.'- Toby (Cedar Class)

'I think Mr Brunstrom would be a great science teacher. He really knew what he was doing and it was good to meet an expert.'- Sam (Willow Class) 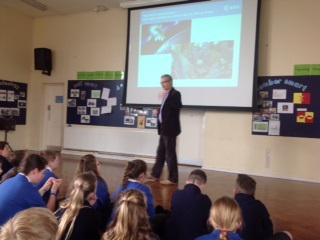 On Thursday 12th March, Year 6 enjoyed an amazing visit to the NEC for the National Big Bang Science and Technology Fair. As we walked around the exhibits, we had a brilliant time learning about how people use science and tech in the real world. After lunch, we even got to watch a Lonely Planet Space Show by a famous science author and find out even more fascinating facts about living in space. 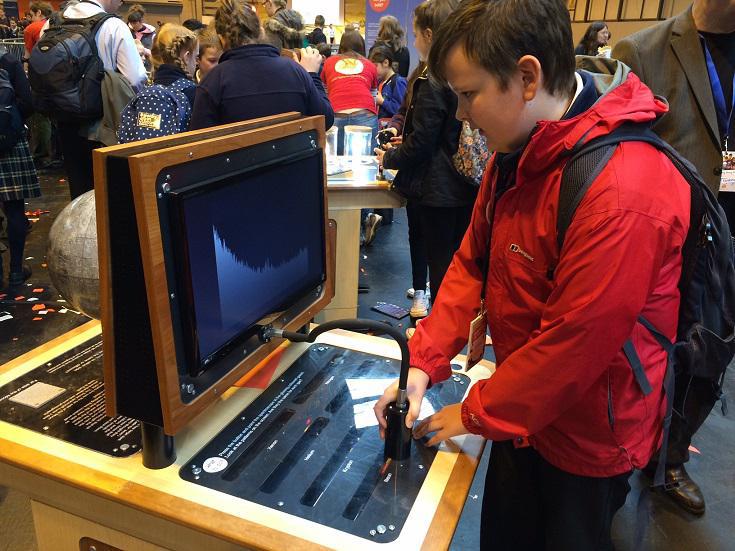 On Friday 20th March we gathered in the hall to watch the solar eclipse on a live stream on our big screen! 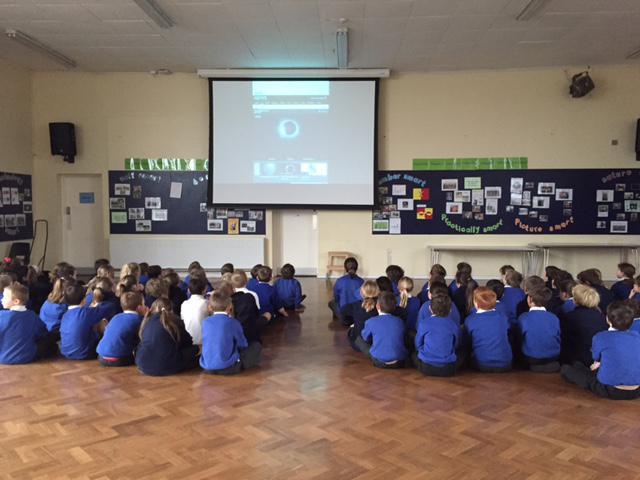 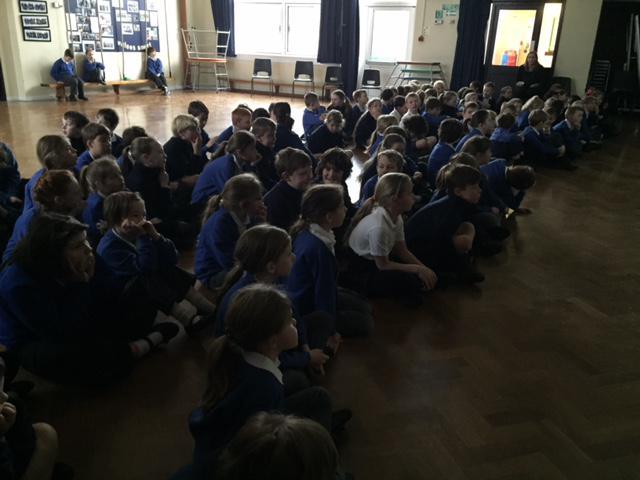 Mr Singer came to talk to us about water on World Water Day, we learnt......
1) They put chlorine in the water to kill bacteria
2) Astronauts do not take water into space - they treat their own wee then drink it!
3) Not all places have taps - some people have to go to a river and collect their water then carry it to where they live. 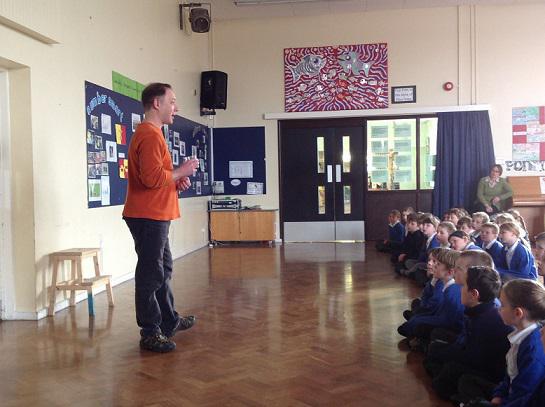