Information for Parents about the PE and Sports Curriculum 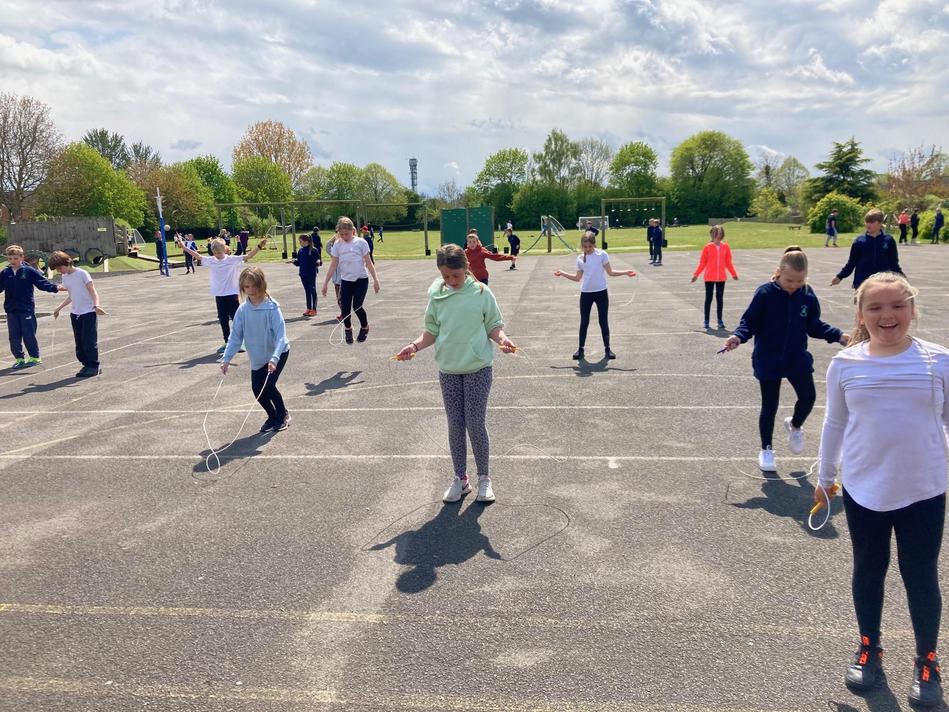 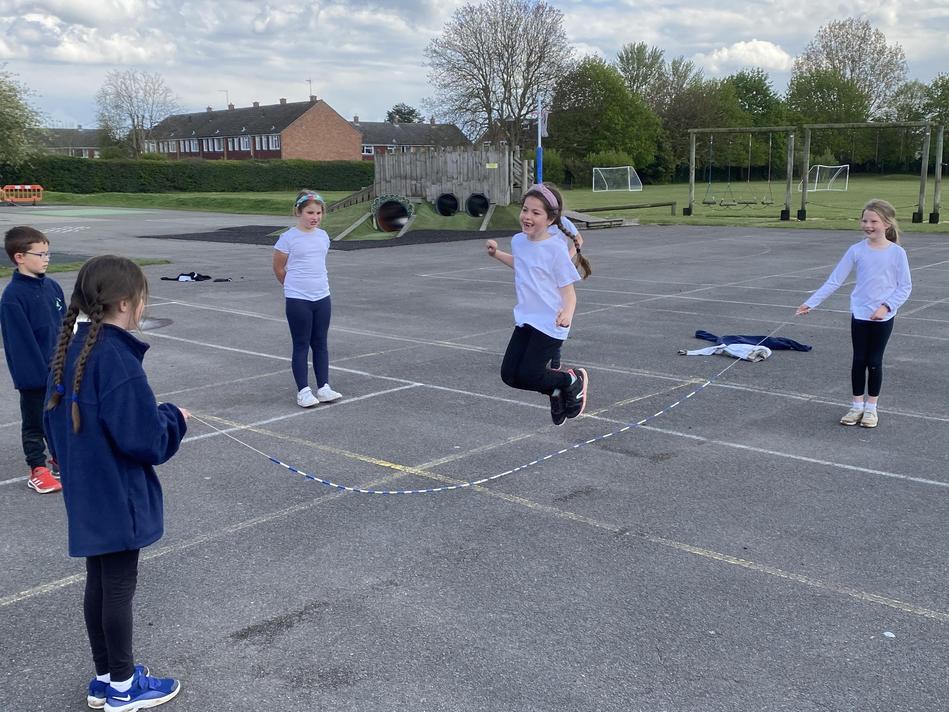 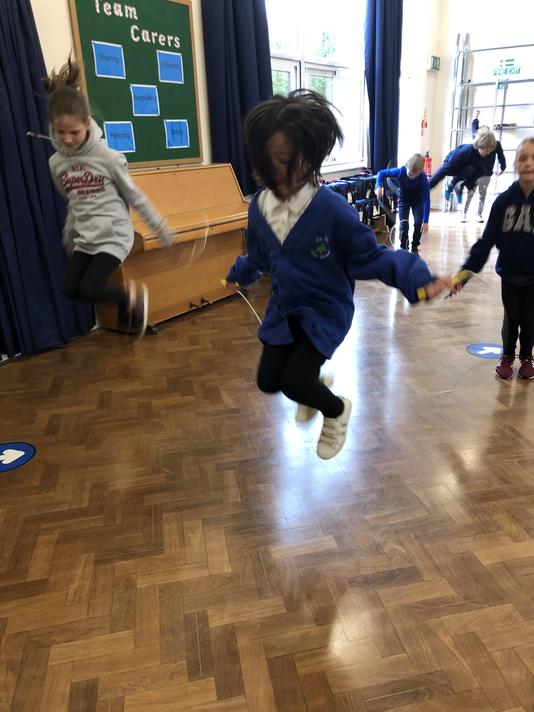 We had a brilliant skipping workshop with Adam from Jump Rope UK. Each class got to learn the basics of skipping and then were taught some really cool tricks such as: The double jump and the crossover. We also got to skip in groups using the large skipping ropes and some of us had a go at running in and out - this brought back lots of memories for the adults of how they would spend their playtimes at school when they were younger. We have bought some large skipping ropes because everyone agreed it was such good fun. We are looking forward to using them in our break times.

We are delighted to announce that Fir Tree Junior School will be participating in the Street Tag Oxfordshire Schools Games Season 1 from 5th Oct 2020 to 28th Dec 2020 and we’re so excited!

Street Tag is a virtual experience where you earn points for all the steps that you do, whether you walk, run or cycle. Wallingford is now filled with virtual tags where you can score bonus points as you walk around the town, which will help us soar up the South Oxfordshire leader board! For communities, Street Tag is exceptional at bringing together families, neighbours, and communities to get out more, by turning streets and green spaces into a virtual playground, to increase families' outdoor experience in walking, running, and cycling more to earn rewards.

Week 1 results…we are 5th on the leader board out of 20 other Oxfordshire schools in our league.

We swiftly moved into 1st place and managed to hold this position until December 28th, when Season 1 ended.

We are now in the Champions League with ten other Oxfordshire schools. 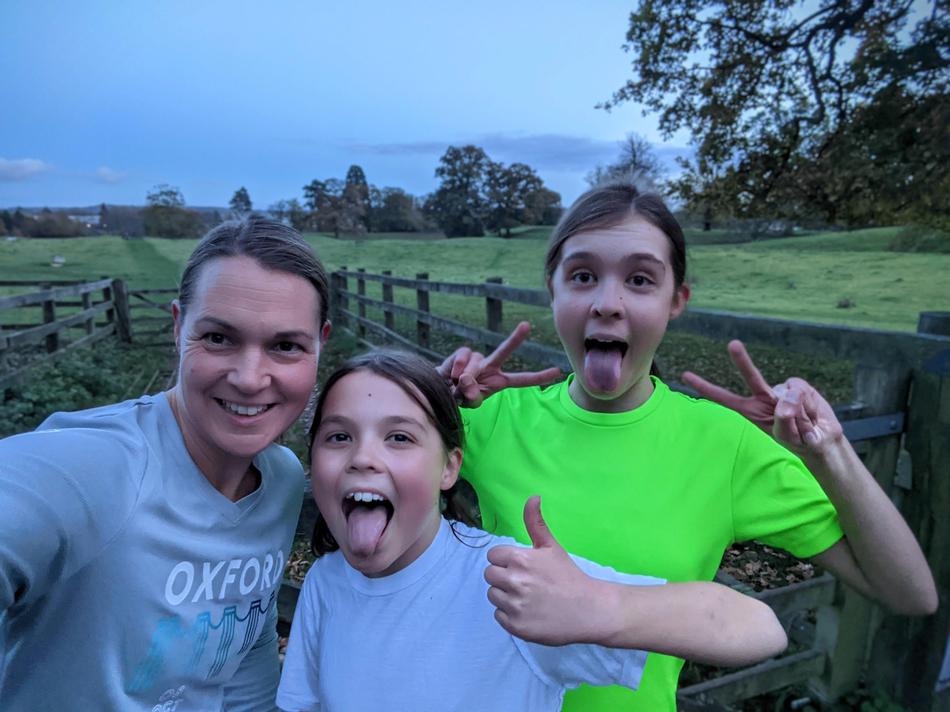 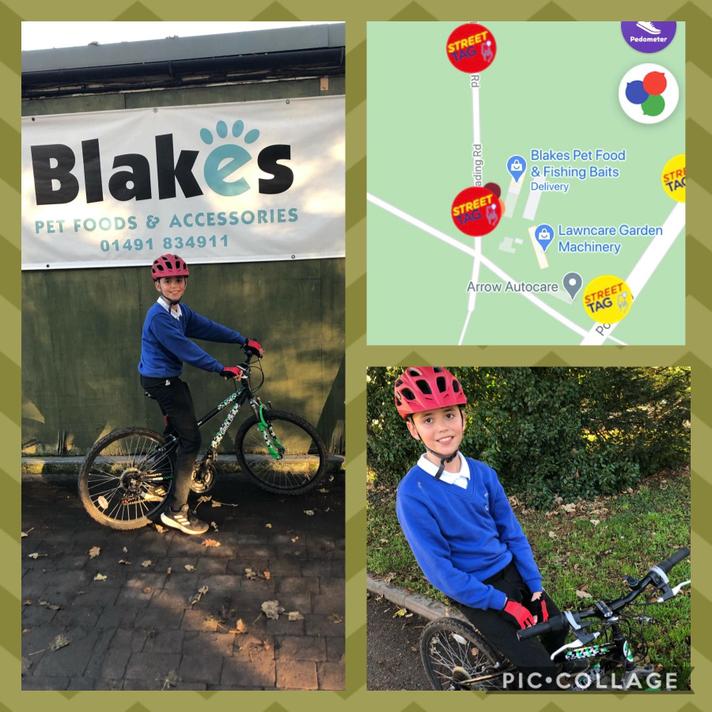 Each year group is also participating in virtual challenges against other partnership schools. The first two challenges are footgolf and a crossbar challenge.

How many kicks of the ball does it take to get the football in the target?

How many times can you hit the crossbar in 10 attempts?

'We enjoyed competing virtually against other schools.' Luke

'It was tricky to start but we soon got the hang of it.' James

We are delighted to have children volunteer to become Sport Leaders. Well done to the Year 6 children from Cherry and Silver Birch. All children had a Sports Leader training session with Nick from Chance to Shine. Nick was very impressed with the group’s confidence and everyone passed with flying colours. Below is Kian standing proudly with his certificate.

Cherry and Silver Birch classes have enjoyed their Bikeability sessions this term.  76% passed their level 2. Well done to everyone for demonstrating great safety awareness. We hope it encourages our children to ride to school when the weather warms up and the days are lighter. 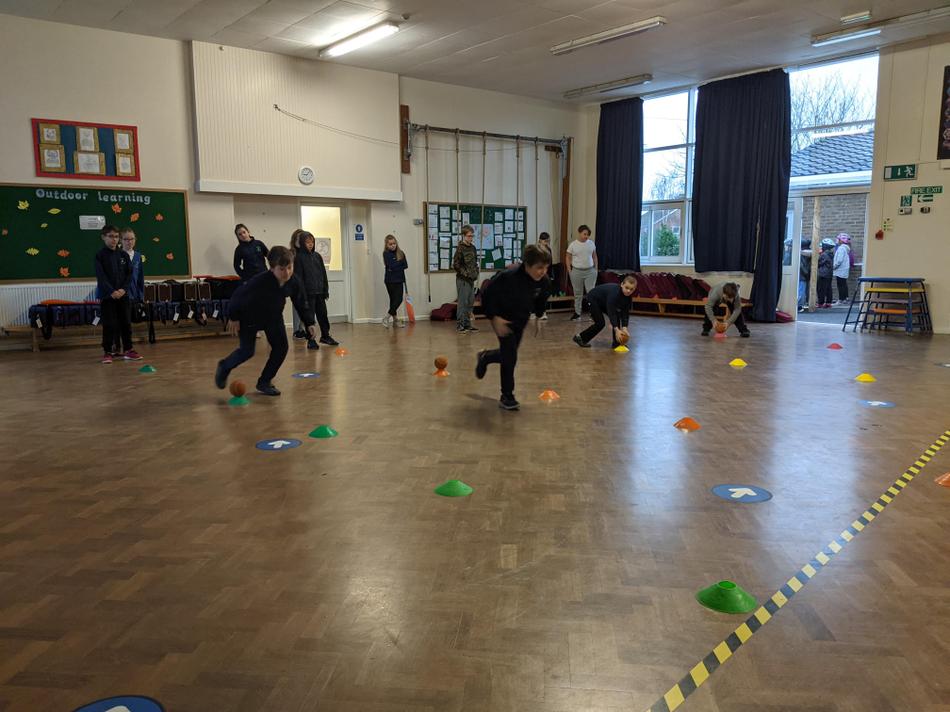 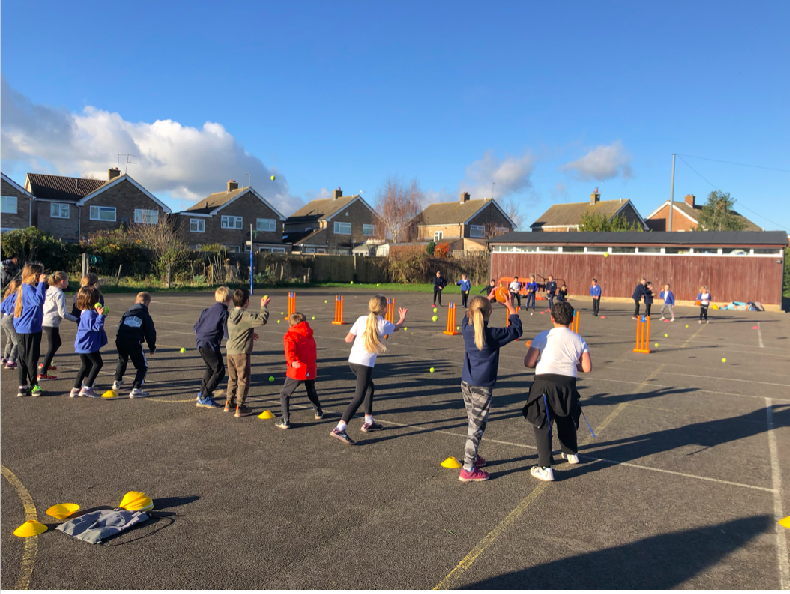 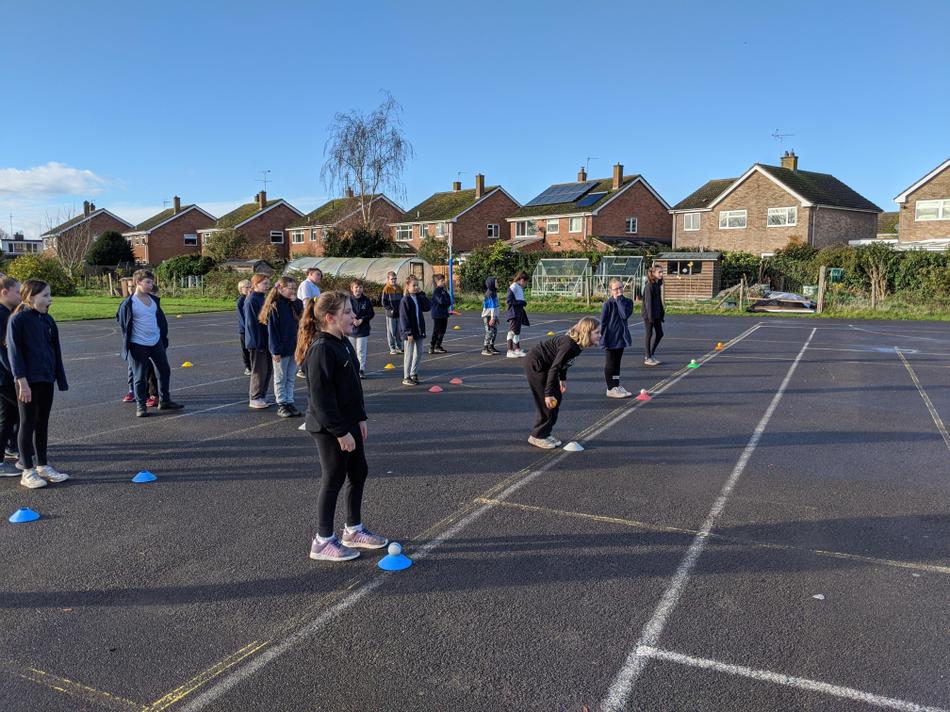 Year 4 and year 6 classes have enjoyed their cricket sessions with Chance to Shine and our amazing coach, Nick. We have had six sessions to develop our batting and bowling technique. We all agree that these sessions have improved our cricket ability and have been immense fun!

Each class enjoyed a 3k jingle jog to spread some festive cheer. Children and some staff dressed in sparkle to race around the field. Donations for two local charities were brought in and we raised a whopping….. 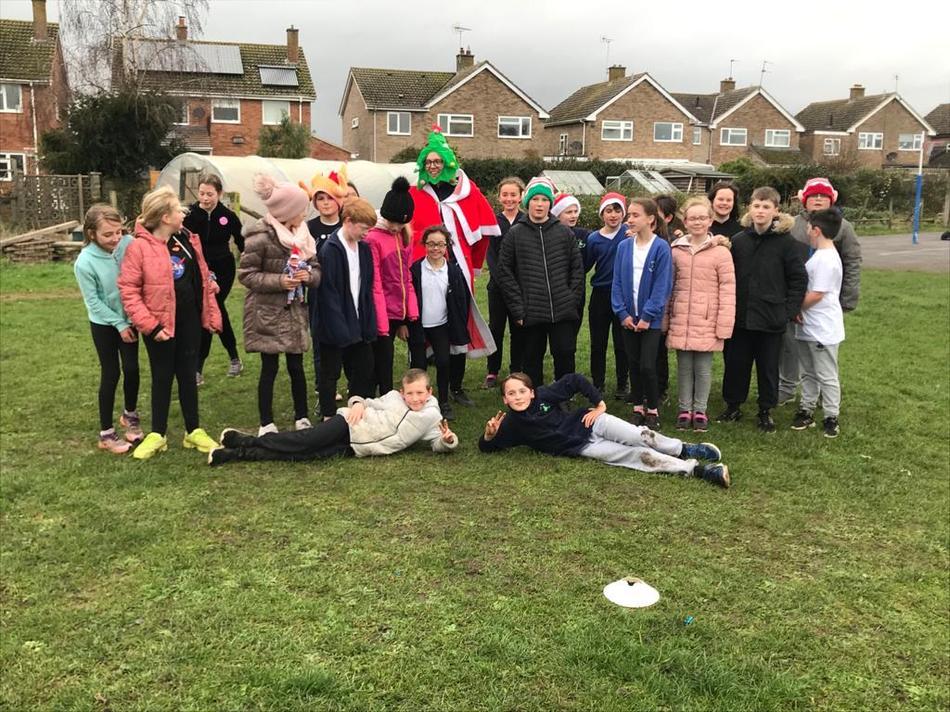 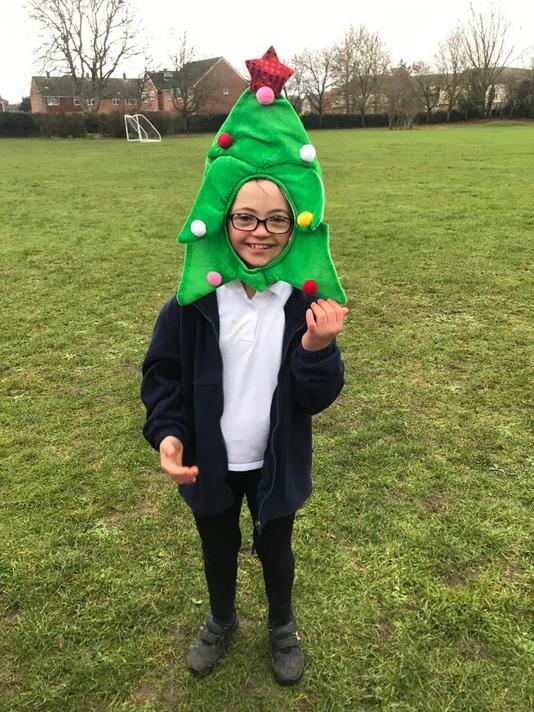 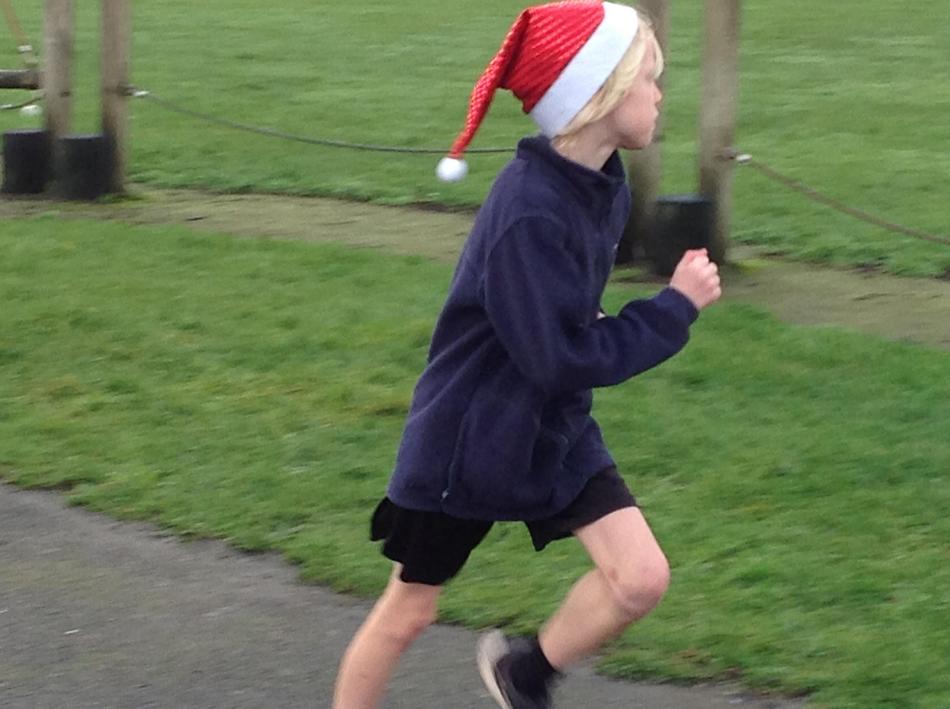 Year 3/4 celebrating their victory in the partnership football tournament.

Our Year 5/6 netballers came second in the partnership tournament.

Our A and B Team are through to the county hockey finals.

Our A team came first and our B team came third in the Year 5/6 partnership football tournament.

Year 6 have had the amazing opportunity of working with ' Chance to Shine' learning how to improve their cricket skills. George, our coach, taught us how to improve our performance and learn the basic principles of the game. Each session was challenging, fun and fast-paced. George was hugely impressed with the enthusiasm of our year 6's and the sessions were eagerly anticipated each week. With the cricket World cup this year, 'Chance to Shine' have definitely whet our appetites for this tournament to start.

Here are some quotes from some of our pupils:

' I really loved the sessions. I liked how he changed the game each week - the variety!'

' I definitely have a greater interest in cricket. I couldn't do it before but now I can.'

A huge well done to our Sportshall athletics group for coming second in the partnership tournament. They are through to the second round - watch this space!

8 of Silver Birch class and 10 from Cherry class recently took their Bikeability level 3 award. Well done to all of our year 6's as we have never had so many pupils passing level 2 - clearly we are cycling more outside of school.

Here is Sycamore class with Day 1 and Day 2 of our whole school active advent calendar. Day 1 is the Go Noodle dance, 'You can't touch this' and day 2 was jogging on the spot for 30 seconds. You can tell by the smiles on their faces that they are enjoying themselves.

We held our first inter competition of the year, Friday19th October. Cherry class and Silver birch played four netball matches in total, demonstrating great skill, teamwork and determination. Cherry won two of the matches and the other two matches were a draw. To be fair, Cherry should have won since most of the netball team are in that class! Silver birch are looking forward to their next inter competition, which will be Tag rugby. Watch this space for news!

Year 6 had a fantastic P.E morning at Wallingford school. They had the opportunity to learn bouldering techniques on the climbing wall; take part in a range of invasion games; develop trampolining skills and learn the 'Thriller' dance. It was great to work with year 6 from other schools too.

We had a hugely successful girls' football tournament at Wallingford school. Our Year 5/6 girls came first and third and our Year 3/4 girls can first! Well done girls for superb play and excellent team spirit.

Our year 5/6 took part in the partnership netball tournament at Wallingford school. Our A team played 5 matches and won each match except for 1. They missed out on first place by a goal. Our B team came fifth in the tournament and were superb, considering it was the first time they have played as a team. The drew two matches and lost three. Well done Lacey for scoring a hat-trick in the final game.

A massive well done to our athletics team who recently came first in the partnership Quadkids tournament at Wallingford school. This included events such as 600m run, 75m sprint, vortex howler throw, standing long jump throw and more. The children are through to the next round at St. Birunus school- good luck!

What a hugely talented and creative bunch of children we have at Fir Tree! To kick off the World cup fever, Fir Tree children were asked to bake a cake to represent a country taking part. Can you recognise the countries in the picture below? Japan, Germany, Sweden, Mexico and Portugal.

A huge well done to Evie Taylor and Maia Bridgeman-Hughes for winning first place for upper and lower school. Money raised will be used to purchase P.E resources. Special thanks to some of our Sportsleaders who stayed behind after school to sell the cakes.

Just look at the beaming smiles of our year 4 netballers in the photo below! We are not surprised after they came second in the year 3/4 netball  tournament yesterday at Wallingford school. Mrs Muller was impressed with their team spirit- well done year 4!
We entered our partnership swimming gala in January held at the Oratory pool. A huge congratulations to our team as their team spirit was excellent. Our boys came third overall and our girls came second. This means that the girls have qualified for the next round in Henley. Thank you to our lovely parents who made such eye-catching banners, demonstrating their support for the team. Good luck to the Fir Tree Fins in the next round.

In anticipation of all the mince pies we might eat over the festive period, Year 6 took part in a ‘Jingle Jog’- a 3k run/ walk around the school field. We calculated that 3K was 1.8 miles and 7.2 laps of our field. In freezing conditions, with plenty of festive cheer, Year 6 had a brilliant run chasing Santa and the naughty elf around the track- well done Year 6 for great festive spirit!

Unfortunately not the ones with chocolate chips.

Some cookies are necessary in order to make this website function correctly. These are set by default and whilst you can block or delete them by changing your browser settings, some functionality such as being able to log in to the website will not work if you do this. The necessary cookies set on this website are as follows:

Cookies that are not necessary to make the website work, but which enable additional functionality, can also be set. By default these cookies are disabled, but you can choose to enable them below: